On the list of scientific tools that help us understand health, evolution or the environment, the Trinidadian guppy doesn’t often come to mind.

The fish are more often thought of as aquarium pets in the U.S. and, in their native Trinidad, wild guppies are so ubiquitous, they’re almost taken for granted.

“In Trinidad, they’re called drain fish and locals would ask us, ‘Why are you studying drain fish?’” said Sarah Fitzpatrick, an assistant professor in Michigan State University’s Department of Integrative Biology.

“Guppies in Trinidad are kind of like squirrels in Michigan,” said Sarah Evans, an associate professor and Fitzpatrick’s departmental colleague in the College of Natural Science.

But thanks to a unique combination of biology and ecology, the guppies have provided researchers with insights into evolution for decades. Evans and Fitzpatrick have pushed those insights a step further, showing the guppies’ potential to help probe big questions about how microbes living in host organisms contribute to health, survival and quality of life. 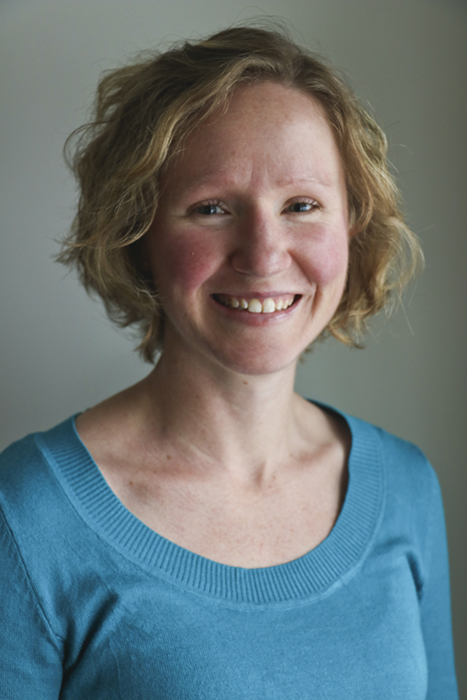 A research team led by the Spartans, who are both based at the W.K. Kellogg Biological Station, published its results on May 25 in the journal Proceedings of the Royal Society B.

As scientists learn more about the gut microbiome — the collection of microbes that lives in a host organism’s digestive tract — it’s becoming increasingly clear that it plays an important role in the well-being of its host. In fact, human health is intimately tied to our gut microbiome.

Evans and Fitzpatrick are interested in some of biology’s big-picture questions and wanted to better understand how microbiomes change as organisms evolve.

“Because the microbiome affects fitness — an organism’s health and reproduction — it can affect evolution,” said Evans, who is a core faculty member of MSU’s Ecology, Evolution and Behavior Program, or EEB.

Nature is full of interesting examples of this, among them termites. Along their evolutionary path, termites adapted to welcome populations of single-celled protozoans into their guts that enable them digest wood.

Giant pandas provide another example. Diet impacts a microbiome and pandas eat only leaves. Yet panda microbiomes can more closely resemble that of their carnivorous relatives than some of their plant-eating kin. That’s likely due to the shape and size of the panda’s gut itself, which evolved from a carnivorous ancestor. 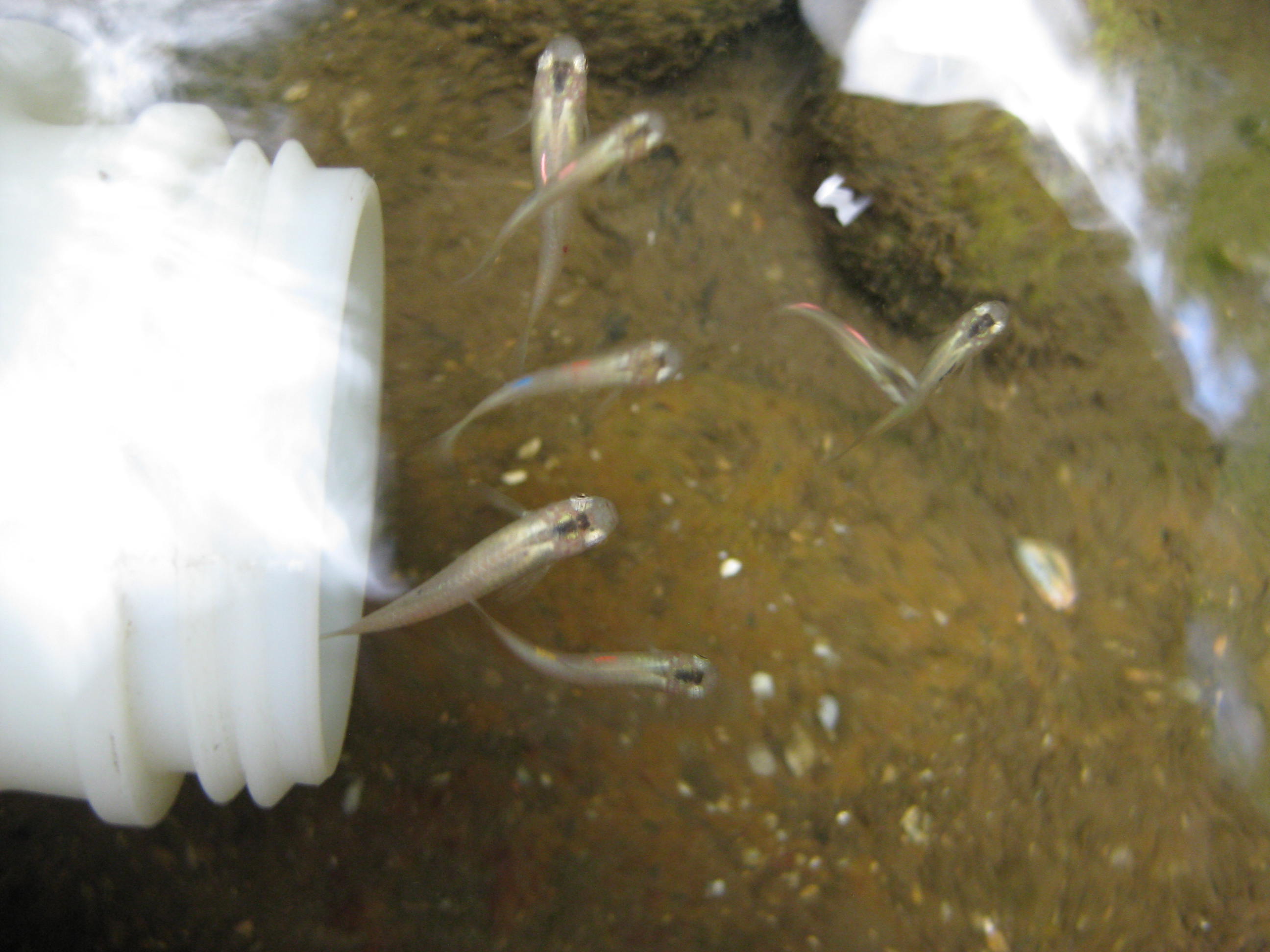 Fishing for science. Credit: Courtesy of the Fitzpatrick Lab

Evans and Fitzpatrick wanted to better investigate what are the biggest drivers of microbiomes as host organisms evolve. It could be things like gut shape, diet or characteristics of a new environment, which is likely to contain microbes that are foreign to the host. The researchers knew guppies could lend a fin from their unique “natural laboratory.”

“Trinidad is a continental island,” said Fitzpatrick, who is also a core faculty member of the EEB program and the coordinator of the Molecular Ecology and Genomics Lab at the Kellogg Biological Station. “It split off from South America a long time ago. It actually has a continuation of the northernmost part of the Andes mountain range.”

Rivers and streams run down Trinidad’s mountains in independent systems. Within each water system are independent ecosystems of guppies that naturally don’t stray far from home.

In the 1950s, evolution researchers realized that they could take guppies from one ecosystem where the fish had lots of natural predators and put them in another where they didn’t. Over time, the genes and traits of the fish would adapt to reflect the native populations in those low-predator environments. Likewise, fish transferred from low-predation sites would adapt when transferred to streams with high numbers of predators.

“And it’s repeatable. They evolve in many of the same ways almost every time,” Evans said. “That’s why this system is in textbooks.”

“Given that we know guppies evolve really fast in parallel ways, we could ask how does the microbiome change as guppies evolve,” Fitzpatrick said. Trinidadian guppies are small fish, just about the size of your thumb. Credit: David Herasimtchuk

Evans and Fitzpatrick returned to the same sites where scientists used to study guppy evolution to instead sample the microbiome of native fish as well as transplanted populations. Going to more than a dozen different sites, they sampled fish lineages that had been transplanted as recently as five years ago and others that were moved closer to 60 years ago.

Working with Brazilian experts from Rio de Janeiro State University, Evans and Fitzpatrick found that the guppies’ microbiomes changed in response to their environment much faster than their genes and physical traits. The shape of guppy guts, which drives what types of microbes survive there, also changed more quickly than expected.

Yet, unlike the genes and traits of transplanted fish descendants, their gut microbe populations did not end up matching those found in the fish native to a particular environment. Despite the mismatch, though, the function of the microbiomes was similar. That is, transplanted fish lineages had different microbes that were essentially doing the same thing as native ones.

“This is the exciting thing about interdisciplinary collaborations, merging ideas and expertise,” Fitzpatrick said. “Then that opens new and interesting questions.”

The two went to Trinidad to collect samples in 2014 and, at the time, it was a side project. Since then, they’ve been starting up their own research labs at MSU, making it tricky to find time to complete the project — a challenge that was further heightened during the COVID-19 pandemic.

Now, they’ve published the research in a special issue of Proceedings of the Royal Society B, which is featuring the work of those affected by the coronavirus, especially women and caretakers.

“We were really glad to support this special issue,” Fitzpatrick said. “Three of the four authors are women with children.”

Although it was a special issue, the research when through the typical, rigorous peer-review before publication. And the Spartans heard some of the typical critiques of a study like this.

For some reviewers, the guppy system is too messy; it doesn’t give researchers enough of the control they’d have with laboratory experiments. For others, it’s not messy enough. With the guppies’ unique ecology, they wonder how widely guppy-derived findings can be applied in nature. But another way of looking at it is no study is perfect and guppies don’t let perfect become the enemy of good.

“We think we’re in a sweet spot – a natural laboratory,” Evans said. “There’s power in having that in-between.”